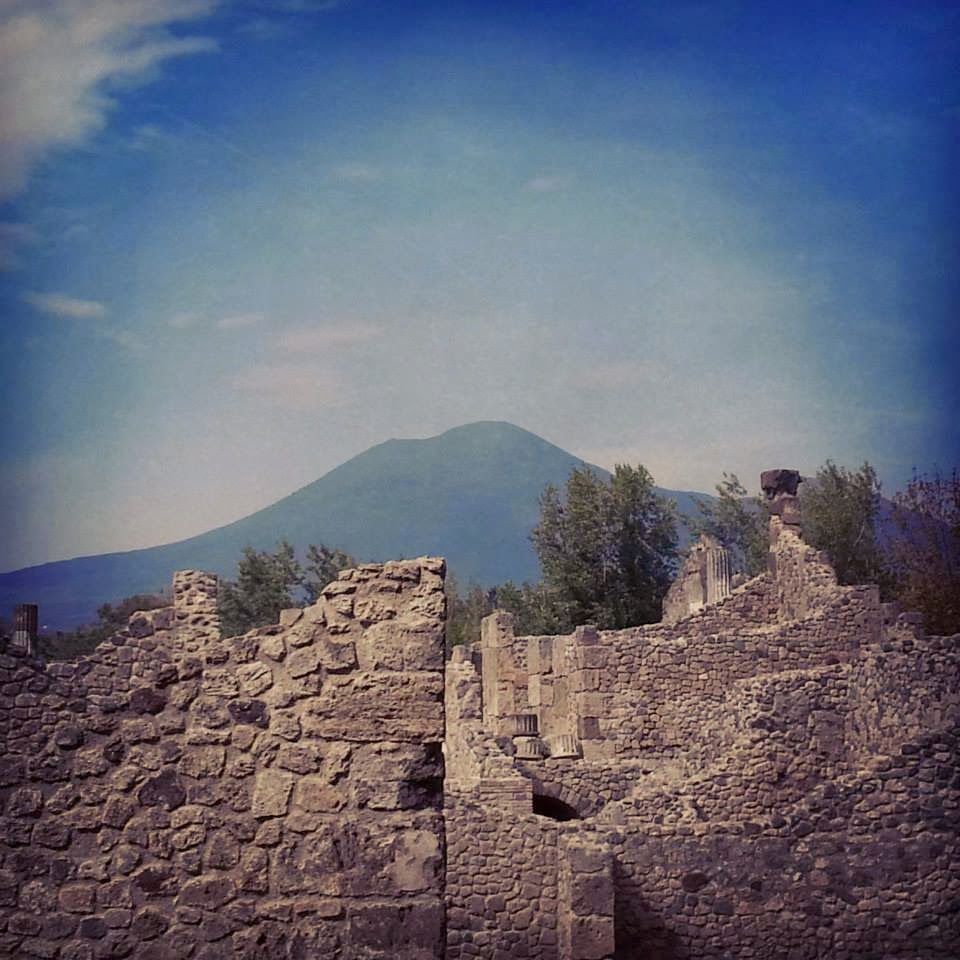 I've always been interested in how other cultures live their daily lives, especially hundreds or thousands of years ago when they had different technologies and priorities but still needed the same basic amenities that we need today. As we left Contursi to move north through Italy we decided to stop at the ancient city of Pompeii. 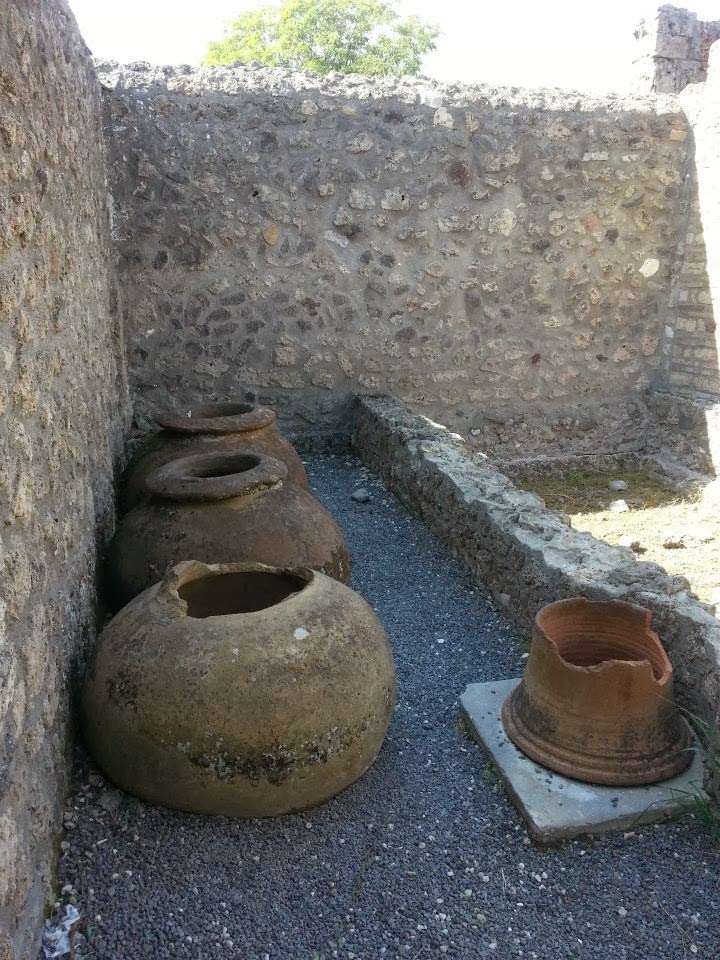 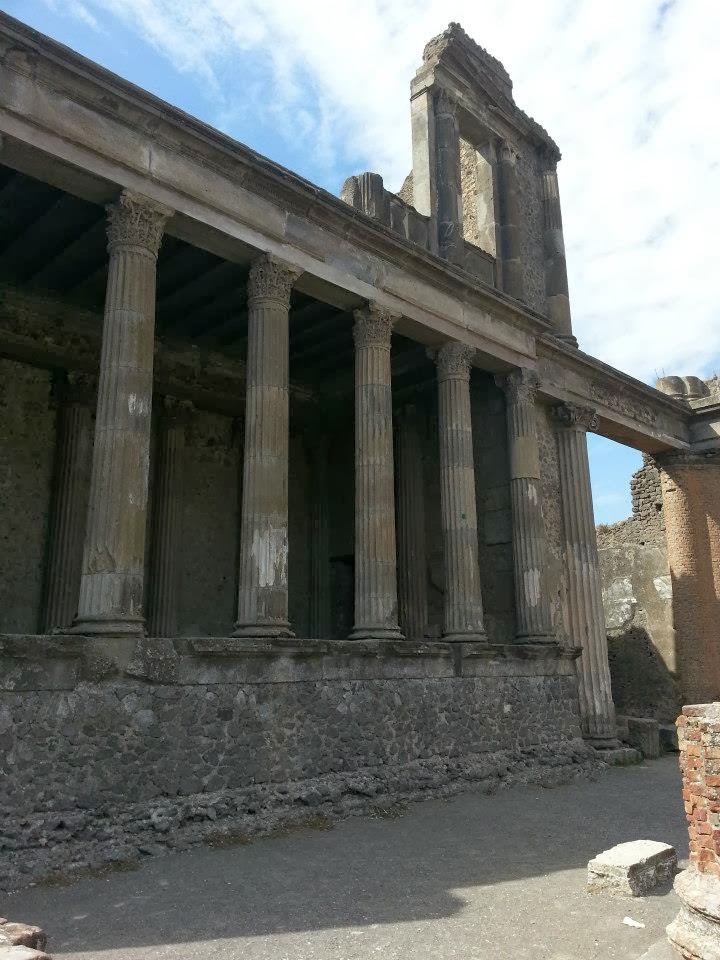 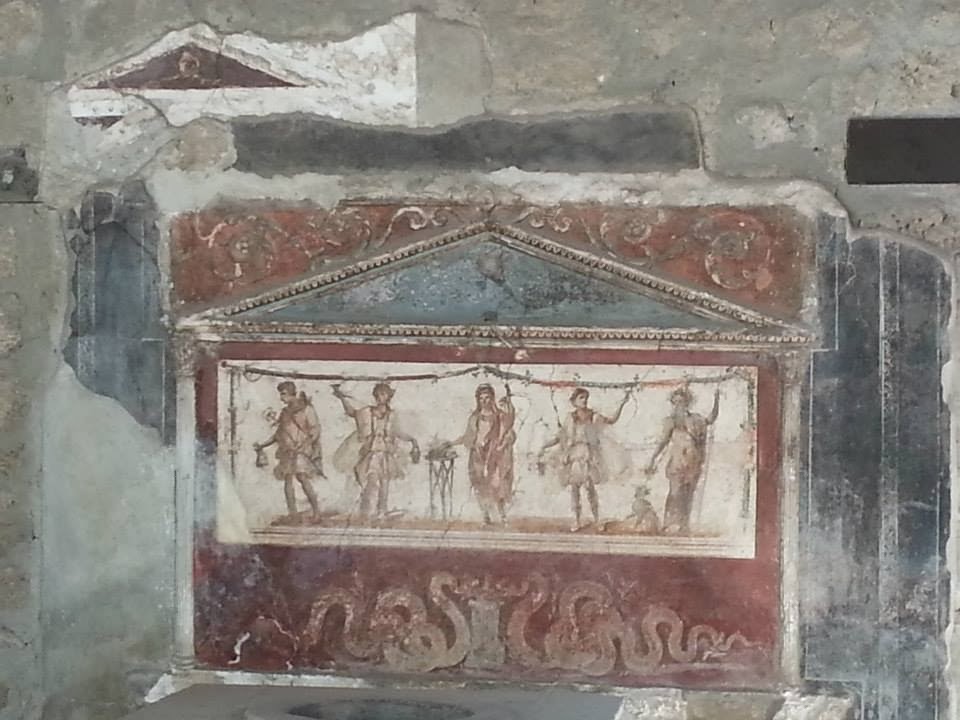 I had been to Pompeii when I was younger with my family, and I was surprised at how much I could remember of it when we walked those same streets again. Luckily one of the events I remembered didn't reoccur, and that was of my last visit to Pompeii where my sister came out of the toilets and was stopped by a man saying she had to pay to use the toilet, being only about 10 she got her purse out to give him a few coins but he took all her money. We fortunately didn't come across anything like that this time round! 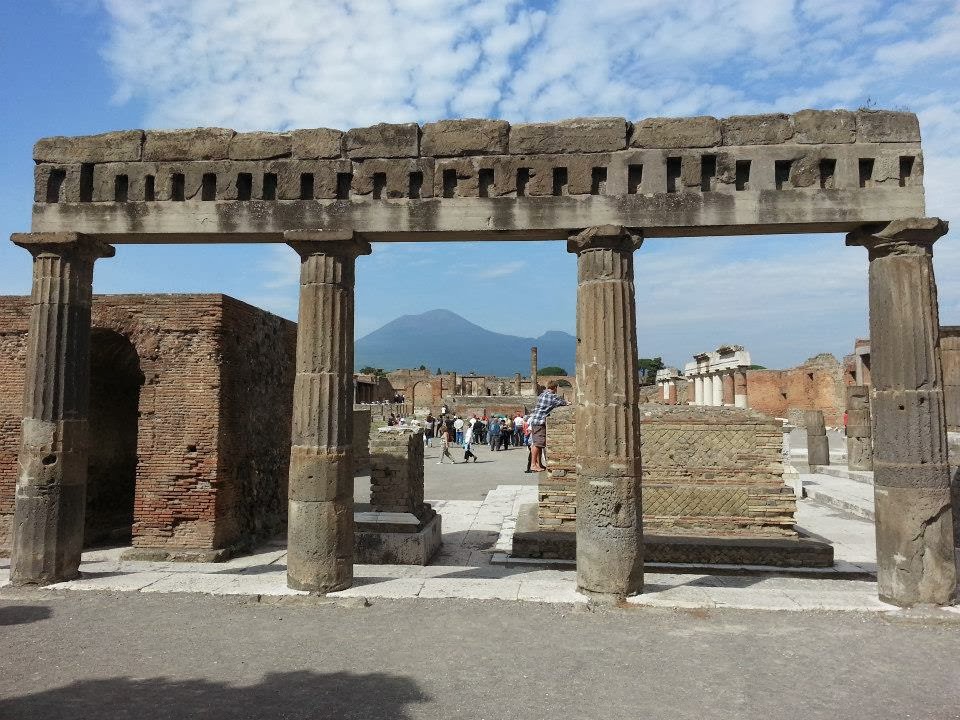 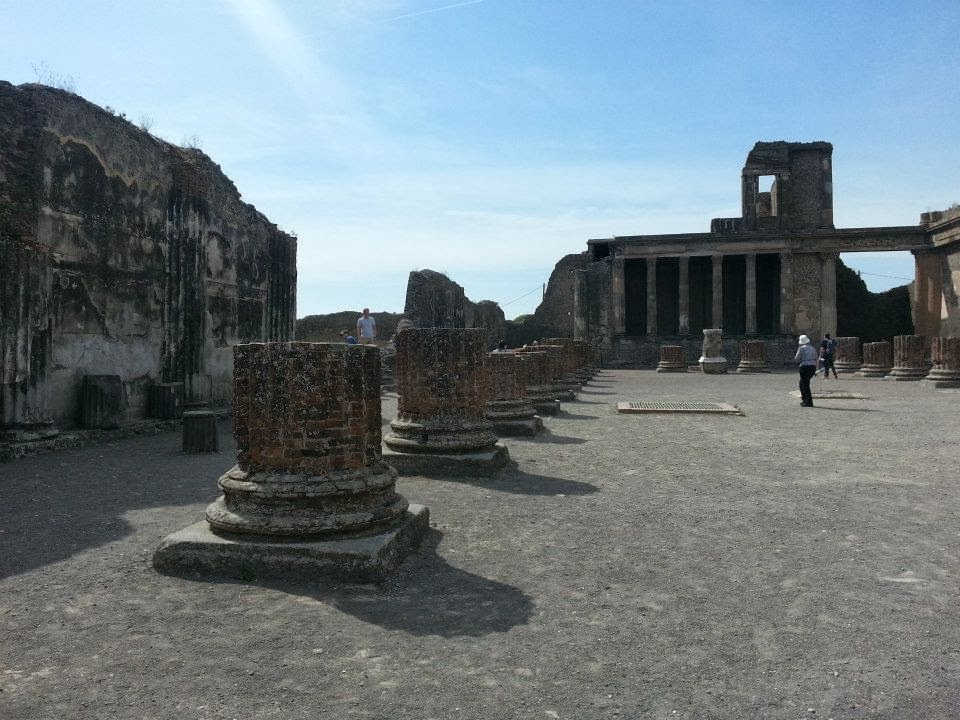 The drive was pretty simple and easy, following the road until Mount Vesuvius started to loom up from the horizon. For some reason I had imagined the old city of Pompeii to be in the middle of nowhere in some hot, dusty, isolated location but it was right in the middle of the modern town of Pompei, which makes sense.

We parked up on the roadside and had a short walk to the entrance to get our tickets, as I'm between the age of 18 and 25 my ticket was half price which was a nice saving. It wasn't busy at this time of year so we went straight in. The first ancient ruin you come across is the enormous amphitheater, which is the oldest surviving Roman amphitheater, a century younger than the Colosseum in Rome, and the first known to be built of stone as they were previously built from wood. During games in 59 AD in the amphitheater a vicious fight broke out between Pompeians and residents of Nuceria which resulted in a ten year ban on the events. 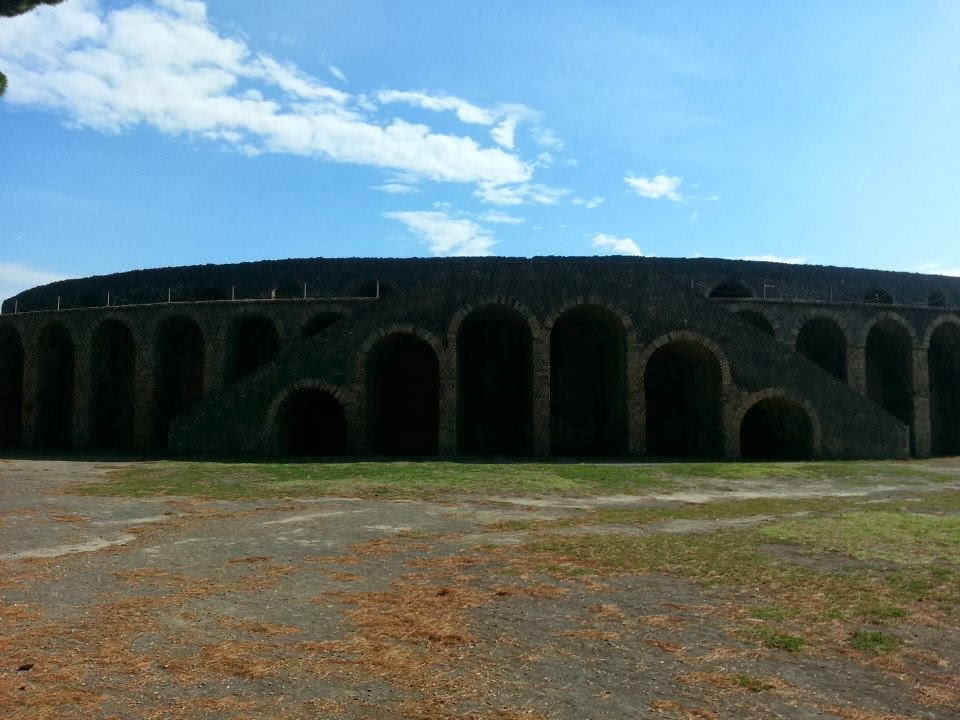 It's always fun to walk around these places imagining what the people were doing in those ancient times. If you can block out the tour groups you can almost see the gladiators! As we wondered through other streets I was amazed at how well preserved paintings and other details were. The lack of air and moisture the artifacts had for nearly two thousands years meant that everything was left nearly as it was when Vesuvius erupted and buried the city under 25 meters of ash.

My favourite part of the city was the bath houses, again for the detail in the artwork on the walls and ceilings and for the size of the place. On display in the bath houses are also a few plaster casts of people that would have died in the city during the eruption. They were discovered when they filled gaps in the solid ash with plaster and the shape of the cast came to be a body. It is thought the residents died from heat exposure and because it happened so suddenly they would have died and frozen in that position as they were buried. It's quite grizzly but gives you an idea of how fast it would have happened and how they would have had no chance to escape. 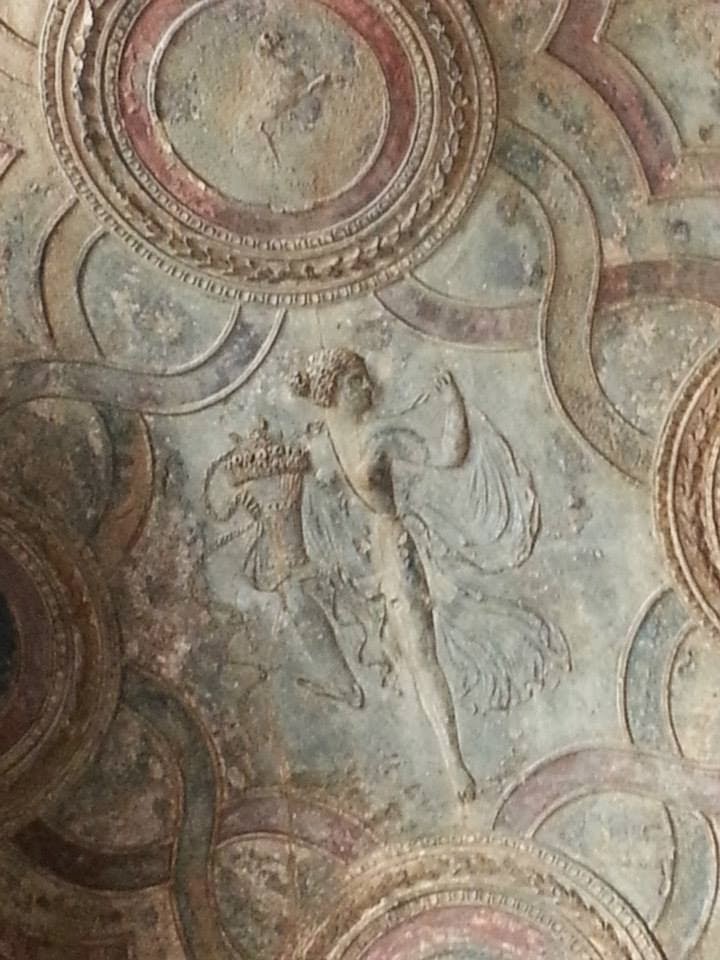 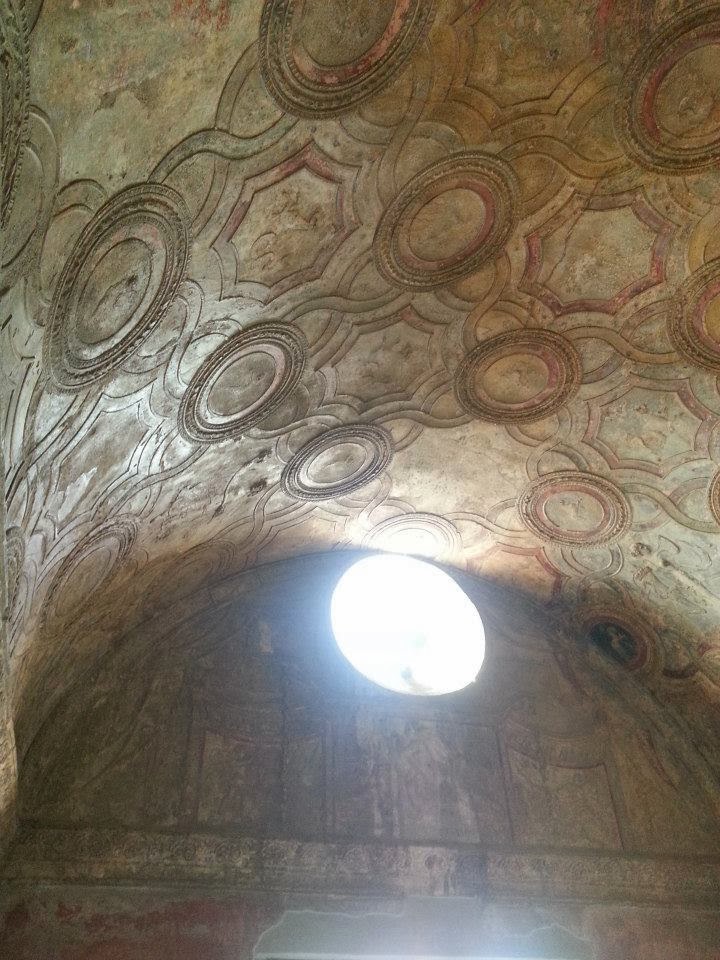 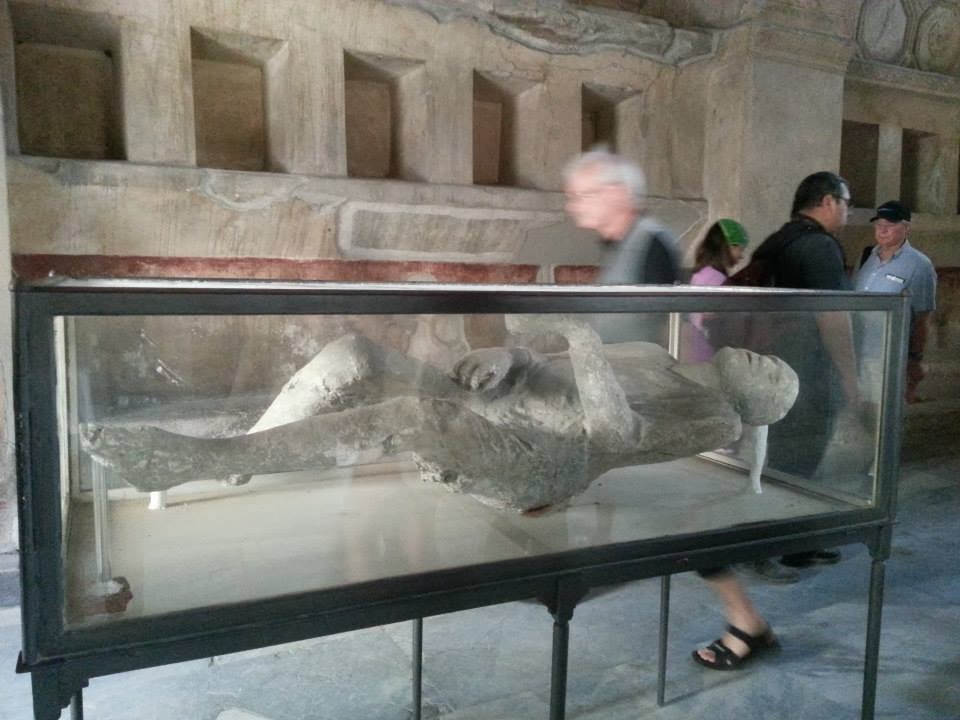 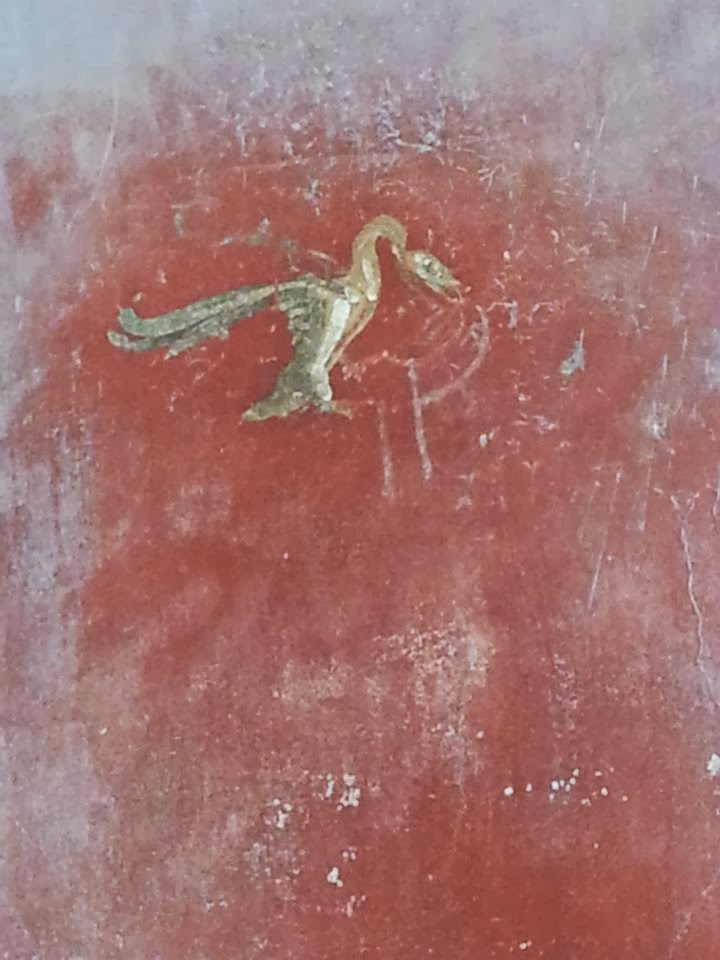 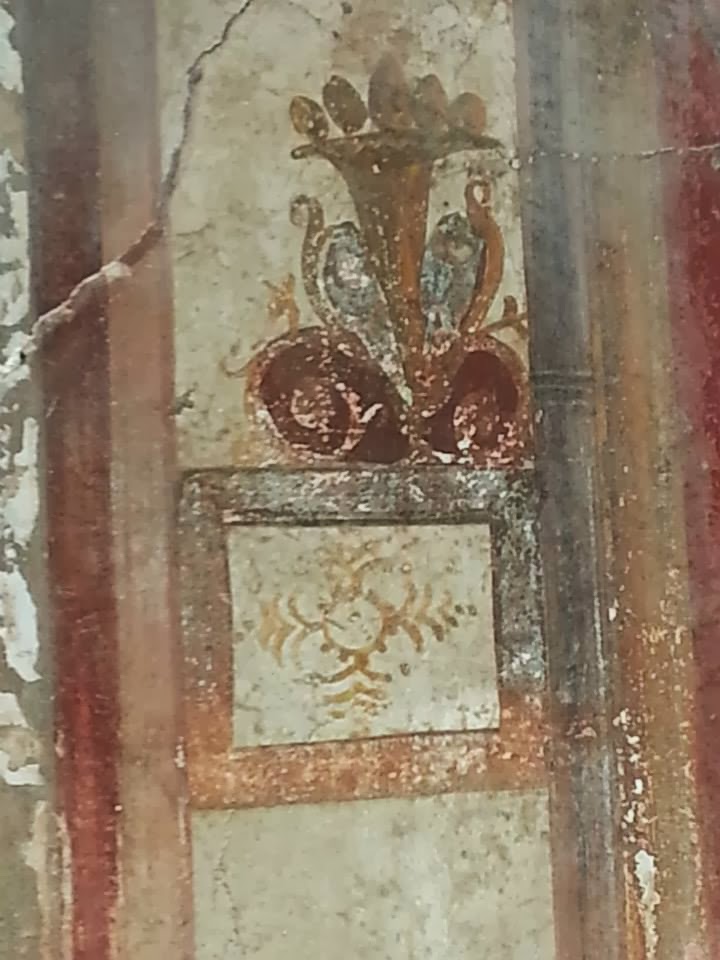 The size of the city is impressive, with about two thirds of it excavated. It's hard to think of it as a devastating place where thousands of people died when you're walking round, apart from when you see the plaster bodies, because the structures are so well preserved and the layout and buildings so similar to a modern city. We left the ruins to pass through stalls and stalls of souvenirs, mostly tacky objects trying to depict Pompeii's erotic art, huge penises on everything! I was very tempted to buy a calender but 25 euros was a bit steep. We ended the evening in a cheep and cheerful cafe and started our drive to Rome. 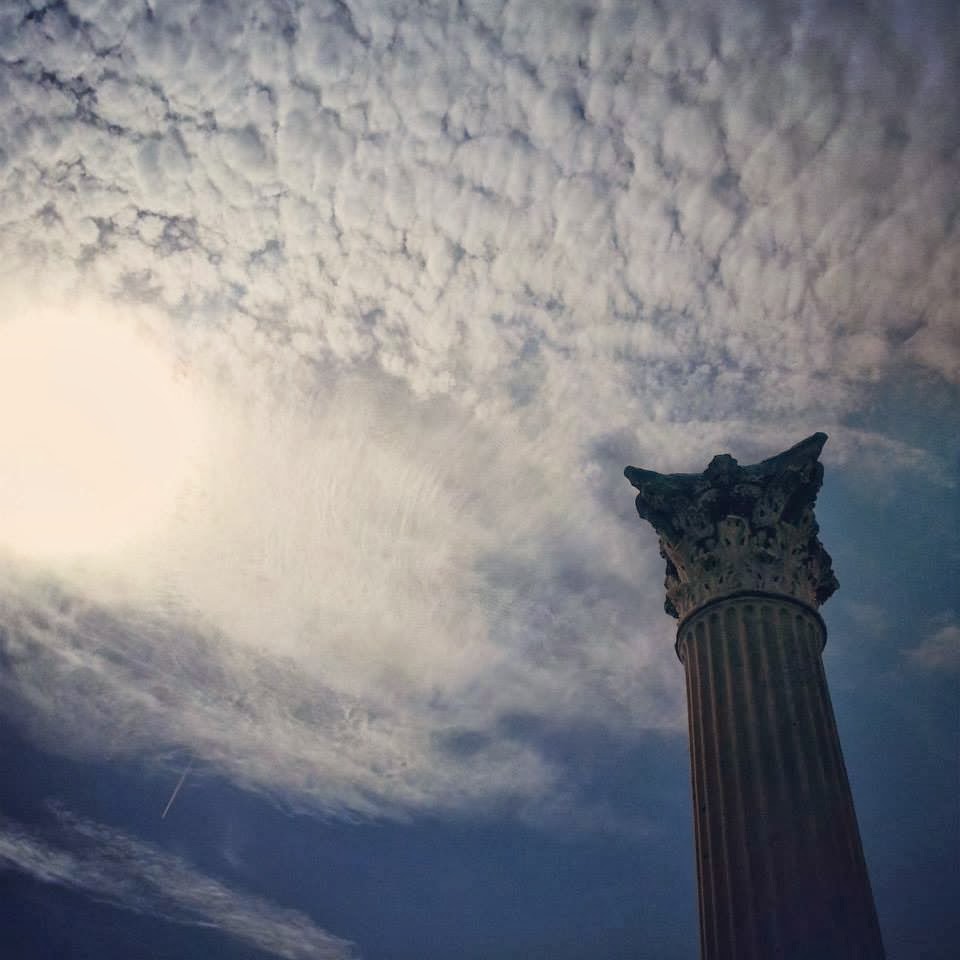 When we were staying at Diego's farm in Sicily we were discussing where we were heading next and on mentioning Contursi Terme, Diego told us about a zip wire he had been on not far from where we were staying. He bought out his laptop and showed us a video filmed on his GoPro of him flying over the landscape on the zipwire, wooping and shouting as he flew along.

I have always been a great lover of heights, Adam has a great fear of heights. We decided there and then that we would pay it a visit. As it was getting on in the year we had a quick look at the website to make sure it was still open and booked ourselves a slot in the afternoon of the last day the zip wire was running. Whilst I was getting steadily more excited to be zipping across the sky, Adam kept watching videos on YouTube and making himself more and more nervous about the impending flight.

The zip wire is suspended between two towns, Castelmezzano and Pietrapertosa, in the Lucanian Dolomites. There are two different cables so you can go twice, fly to the other town and then come back to the one you started at, and they are between 859 and 888 metres high. It takes about 90 seconds to fly across, covering 1450 meters and reaching a speed of 75-80mph. I couldn't wait! 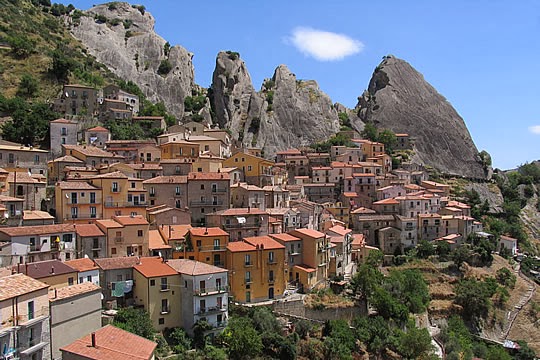 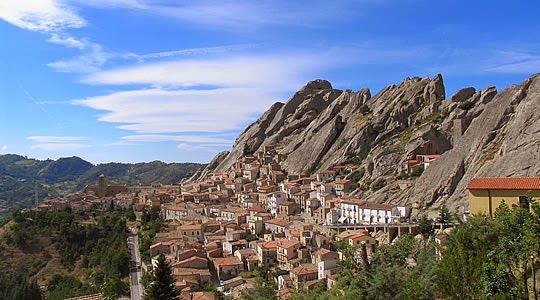 We left early in the morning to get our slow little van up to the tiny mountain towns, only stopping to collect our exhaust when it fell off! As we started the incline Adam kept looking up and around to see if he could spot the zip wire, he was pointing at electricity cables and I kept saying yeah maybe that's it, but didn't tell him it would actually be a lot higher up than that!

We didn't realise how popular the attraction would be considering both the towns it connects are tiny, and as there was no official parking and everything was perched on a cliff we had to find a space to park on the winding mountain road and walk down to the ticket booth. Adam spotted some nice glass jars left by a dustbin that he made a mental note to come back for later! We were shuttled up in a van to the starting point and told to keep walking along the track until we reached the departure rig. 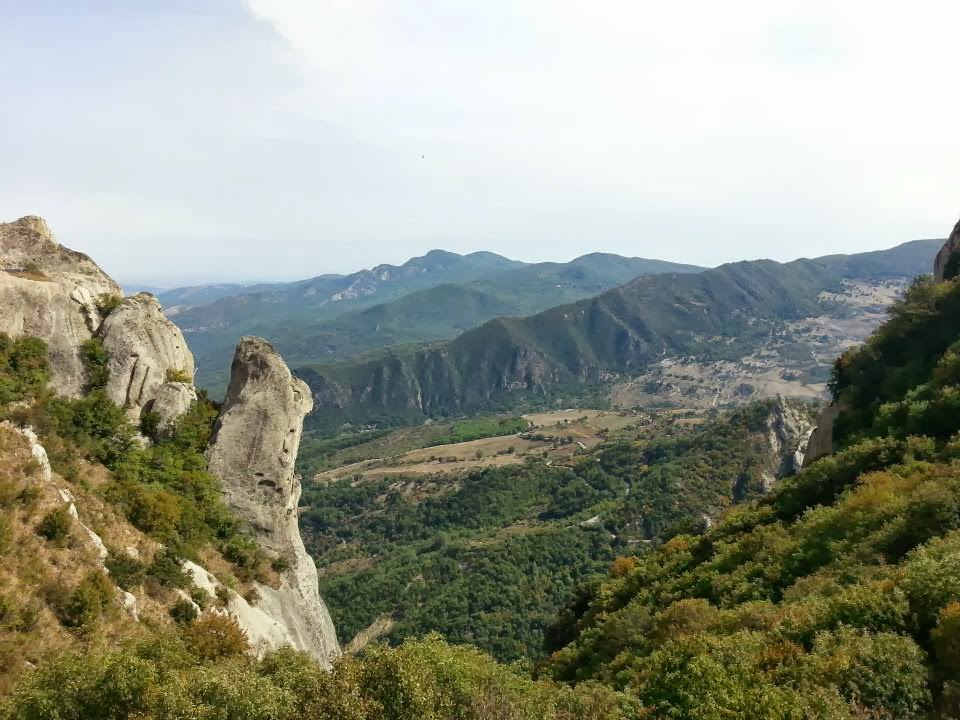 This was easier said than done as I struggled up the steep hill, but it eventually leveled off a bit and the views around us were amazing. Only pedestrians and quad bikes could make it up the track, to bring back and forth equipment and harnesses, and their were picnic benches and viewpoints along the way for walkers. The medieval towns were surrounded by forests.

When we reached the top there were a couple of other people waiting to go and we hung around waiting to go next. They had all the kit on, a sleeping bag like harness and a helmet, but they didn't go for ages and not knowing the language we didn't know why which put Adam on edge even more. He checked out the metal structures, equipment and the procedure of getting hooked up to the cable, I'm not sure if this helped him or not but he insisted he went first anyway. 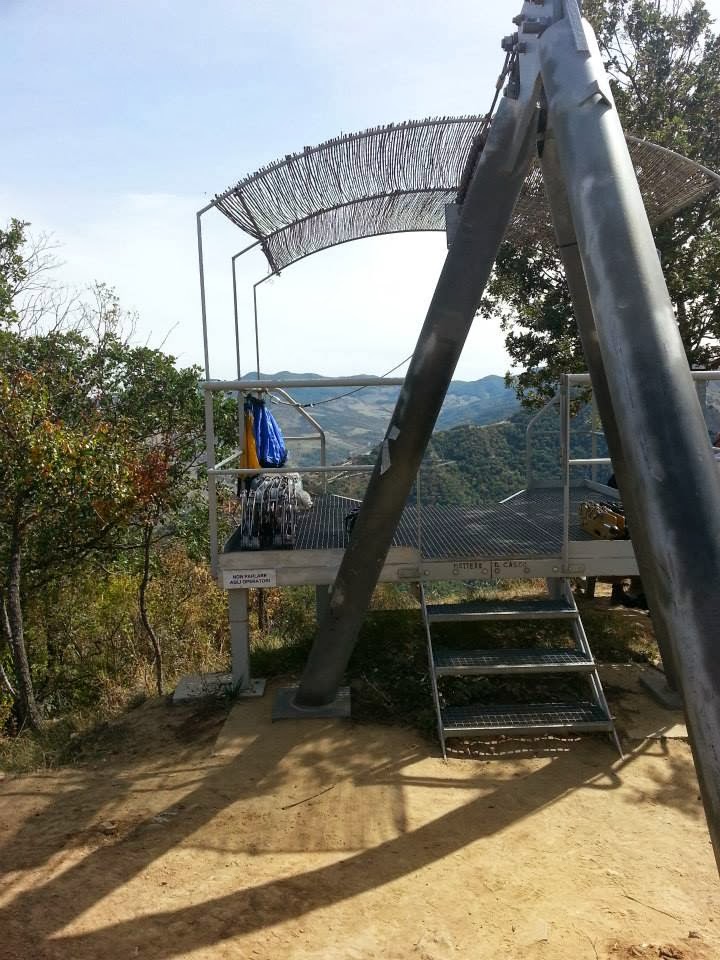 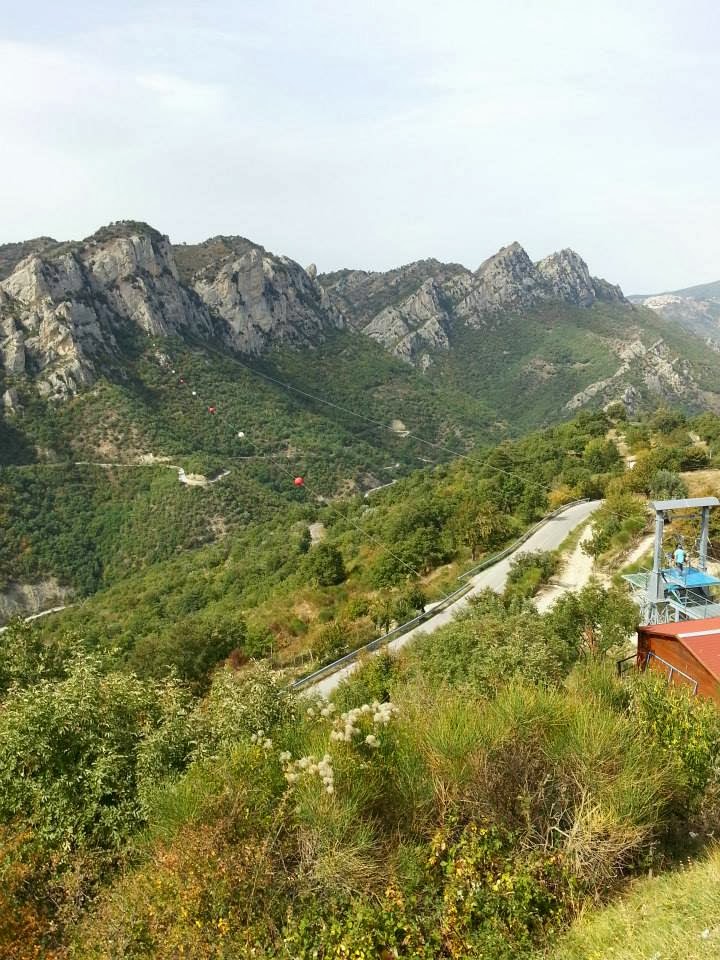 After about an hour the people working on the zip wire finally started getting it going again and we waited patiently in line behind the other 'angels' with all our gear on. But being polite and English the people that had accumulated behind us whilst no one was going on the zip wire somehow squeezed in front of us!

When it got to Adam's turn I could see he was quite nervous but he didn't back out and I watched his feet disappear down the mountain as he took flight. On my go they harnessed me up to the cable and I lent forward to be in a lying down position but suspended from the wire and I tucked my feet into a strap so my legs didn't dangle down and was told to hold onto the strap behind my back so my arms didn't flap about in the wind. They pull you back slightly to get some momentum and then you're released with a 'ciao!' to soar over the edge of the cliff and the valley. 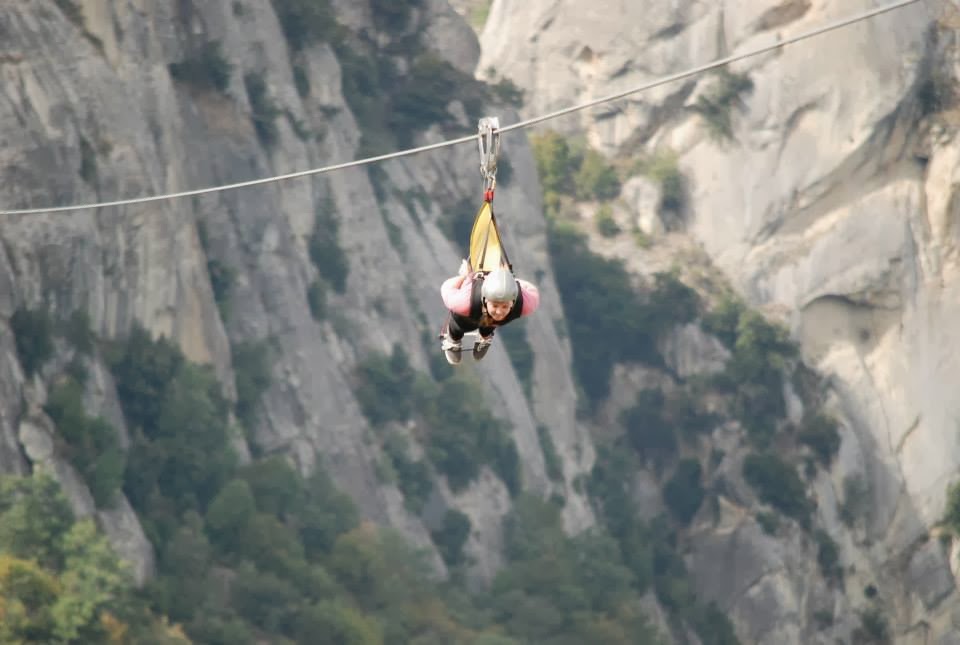 You can't really tell how fast you are travelling apart from the speed makes your eyes water a bit, and because you are so high up you kind of distance yourself from the fear of it. Like being in a plane is a lot less scary than standing at the top of a ladder because you can't really relate to being that high up most of the time. It was a pretty amazing feeling to have that flying super power for 90 seconds! 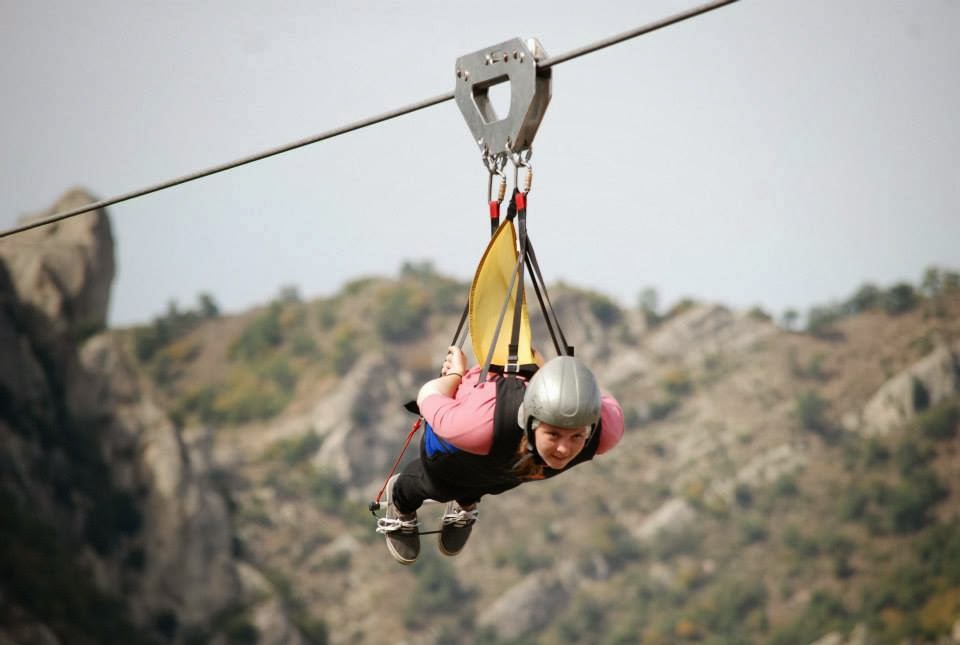 We had to walk through the town to get to the second station and you could hear all the residents inside their cool stone houses having lunch. Mountain rock formed the walls and staircases for some of the houses with narrow lanes leading between them bringing you out to an opening to view the mountain. It would have been nice to have looked around more but we were in our sleeping bag suits and carrying a big chunk of metal that connected us to the cable. The flight back was just as spectacular and offered a different view of the valley. It was definitely worth the price and the tiring uphill walk and a great way to see Italy!
Posted by Kerry at 3:24 pm No comments:

Email ThisBlogThis!Share to TwitterShare to FacebookShare to Pinterest
Newer Posts Older Posts Home
Subscribe to: Posts (Atom)
Kerry. Writing about places I have been and plan to go.

All photos are my own unless stated otherwise. Please link back to the post if you use them :)