Last week when we went on the walking tour of Barcelona we found that the same company also holds a Spanish cooking experience lesson in one of their bars by the port. This was to be a lesson in cooking paella, tapas and learning how to make sangria. It cost about 20 euros each and we figured for the price of a meal out we could go and learn how to cook it properly, meet some people and take advantage of the many jugs of sangria.

We turned up at the bar a little early, just before 6pm. We made the most of the day in Barcelona and in the afternoon went to visit a few Gaudì buildings and the Segrada Familia. Which looks quite ugly and melted from a distance but when you get up close and see how much detail there is in the facades you can kinda see why it's taking over 100 years to build. We didn't go inside as it was quite expensive for our daily budget and also the queue looked like it snaked around the building site three times, but I'd like to see it again when it's finished, hopefully in my life time!

Back at the bar the chef hosting the evening came out to greet us, a group of about 24 (Adam being one of three males). He took us to Barcelona's old, famous market La Boqueria, which Adam and I had had a quick look round on our last visit but on his little tour gave us some information such as in the summer the fruit section is very bright with lots of colourful fruits but in the winter they sell loads of different kinds of mushrooms instead. I also found out that a kilo of saffron is around 6,000€ but this market is one of the cheapest places to buy it in Spain! Not that I'd ever need that much saffron but compared to 1€ for a kilo of onions that is quite expensive. We went past stalls selling every single piece of a cows insides including brain and stomach lining as well as a creepy skinned sheeps head with its little teeth smiling at you. The chef bought some fresh mussels and prawns for the paella and we headed back to the bar, pretty hungry at this point, a sheeps head and pig trotters won't put me off food!

From what I'd heard about the 'Spanish cooking experience' when we booked it I thought we might be cooking the paella or tapas ourselves but although that didn't turn out to be the case it wasn't a disappointing evening. When back at the bar we were seated at a few tables, us with a 20 year old Canadian on a 30 day backpacking tour of Europe with a friend, a slightly older South African couple living in Germany and on a short break, and a shy Thai lady in Barcelona for a medical conference but seeing the sights in the few days before. We were given our first jug of sangria and the tapas consisted of a plate of 'potatas bravas' (fried potato cubes with a spicy tomato sauce), a 'tortilla Espanola' (Spanish potato omelette), and some cooked green peppers which were really sweet and yummy. We were also given a plate of bread with some tomatoes chopped in half, a little pot of olive oil and a selection of salami, ham and cheese. The tapas lesson was pretty basic which I found quite funny. You pick up a piece of bread, rub the tomato on it, drizzle on some olive oil and then top it with salami, ham and cheese!

Our Iranian chef was a little over qualified for the job we found out so I'm sure he found this quite amusing too. He lived in London for 4 years working in some pretty swanky hotels and restaurants but going back n forth to Iran to visit his mum every now n then didn't go down very well with the immigration at the airport so after 8 hours of questioning decides to move to Barcelona. He cooked the paella infront of us in a massive shallow pan and told us the right order to put everything in and that once the rice and water is added the biggest mistake it to keep stirring it. It takes about 40 minutes to cook so whilst the liquid was evaporating he showed us how to make sangria and then let us make our own jugs. Goes without saying that the jug Adam made was mostly brandy, rum and red wine and not a lot of lemonade or orange juice! 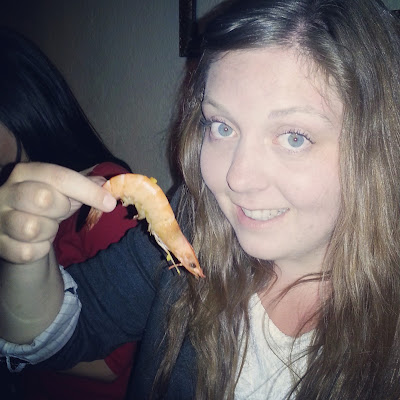 Once the paella was cooked there was plenty to go around and I even tried to get over my fear of sea food by pulling the head and tail off a massive prawn, it didn't even taste too bad! We ended up being the last table to leave and it was a really good night with a lot of different people. The Travellers Bar cooking experience is definitely worth checking out.
Posted by Kerry at 6:37 pm 4 comments:

Email ThisBlogThis!Share to TwitterShare to FacebookShare to Pinterest
Newer Posts Older Posts Home
Subscribe to: Posts (Atom)
Kerry. Writing about places I have been and plan to go.

All photos are my own unless stated otherwise. Please link back to the post if you use them :)